According to a report released today, processed meat causes bowel (colorectal) cancer. After considering more than 800 studies examining the association between meat and cancer, the World Health Organization’s International Agency for Research on Cancer (IARC) Working Group classified processed meats as Group 1, carcinogenic (cancer causing). Yet the results aren’t as crystal clear as they seem.

What is Red Meat and Processed Meat?

Processed meat – meat that is transformed through salting, curing, fermenting, smoking or other processes to preserve the meat and enhance flavor. Processed meats can include other meats or meat byproducts such as blood. Hot dogs, sausages, corn beef, beef jerky and canned meat are all examples of processed meat.

Carcinogenic – compounds that are carcinogenic “do not cause cancer at all times, under all circumstances. Some may only cause cancer in people who have a certain genetic makeup. Some of these agents may lead to cancer after only a very small exposure, while others might require intense exposure over many years,” states the American Cancer Society.

Processed Meat:
Though they considered 800 studies, their conclusions were drawn upon 18 cohort studies (this is when scientists follow a group of people that don’t have the disease – in this case cancer – over time to see who does and who doesn’t develop cancer). Twelve of the 18 studies reported positive associations between processed meat consumption and colorectal cancer. Six out of 9 case-control studies (where they look at the diet of people with cancer and compare it to the diet of people without cancer) reported a positive association and a meta-analysis (statistical approach to combining results from several studies) of 10 cohort studies reported a statistically significant dose-response relationship with an 18% increase in risk for every 50 gram (1.5 oz. or about the size of ½ of a deck of cards) of processed meat eaten daily. This is relative risk. Your risk goes up 1.18 times. To put this into perspective, if your risk of developing it over the course of a lifetime is 6%. If you eat 1.5 oz. of processed meat daily, your risk will go up to 7%. This is an example, this report doesn’t tell us how likely we are to develop bowel cancer.

Dr. Kurt Straif, Head of the IARC Monographs Programme stated “for an individual, the risk of developing colorectal cancer because of their consumption of processed meat remains small, but this risk increases with the amount of meat consumed.” Recent estimates suggest approximately 34,000 cancer deaths per year can be attributed to diets high in processed meats.

Red Meat:
The Working Group classified red meat as “probably carcinogenic to humans” while stating there is “limited evidence in human beings for the carcinogenicity of the consumption of red meat.” If those two statements sound like they contradict each other, here’s why:

When meat, fish, or poultry (chicken, turkey, ducks, geese) are cooked over high temperatures, chemical compounds that are known or suspected carcinogens (cancer causing) including N-nitroso-compounds (NOC), polycyclic aromatic hydrocarbons (PAH), advanced glycation end products (AGEs) and heterocyclic aromatic amines (HCA) are formed. High and dry heat including frying, grilling and barbecuing are the worst combination for the production of these chemicals. The 2-page report mentions some of these compounds as “mechanistic evidence” supporting their conclusions while also stating that we don’t know how cancer risk is increased by processed and red meat. (The full report won’t come out for several months).

Polycyclic aromatic hydrocarbons (PAH) are formed when fat and juices from meat grilled over an open flame drip onto the fire, resulting in flames, and PAHs adhering to the surface of the meat. Smoking meats also leads to the formation of PAHs. PAHs are also found in air pollution.

Advanced glycation end products (AGEs) are harmful compounds formed during dry heat cooking. Though many foods contain AGEs, meats fried or cooked over dry heat have significantly more AGEs than any other food. AGEs accumulate in the human body, affect cell functioning and may contribute to insulin resistance, type 2 diabetes and, as the name implies, aging.

Heterocyclic aromatic amines (HCA) are formed when amino acids, sugars and creatine react at high temperatures. When meat, fish, pork and poultry are cooked at higher temperatures for a longer period of time, more HCAs are formed.

HCAs and PAHs must be metabolized by specific enzymes (a process called bioactivation) before they can damage DNA. Yet the activity of these enzymes varies between people and therefore, one’s risk of developing cancer due to HCA and PAH exposure depends on how they metabolize these compounds.

What this Report Does Not Tell Us

IARC Working Groups examine if exposure to a specific food or compound could cause cancer but does not tell us how likely we are to get cancer. Also, there are many known human carcinogens (UV light – including the UV light in those LEDs lights used to set gel nails, alcohol, the mineral oil you use on wood cutting boards and more) – some many cause cancer after little exposure while others take a lifetime of exposure. Many factors influence the development of cancer including age, gender, family history, and other lifestyle factors (tobacco and alcohol use, weight, diet, physical activity).

How Much Processed & Red Meat is Too Much?

Cancer is a complex disease and no single food causes, cures or prevents cancer. However, as stated by the American Institute for Cancer Research (AICR):

AICR recommends avoiding processed meats and eating no more than 18 ounces of red meat per week (3 oz. = about the amount in a deck of cards). I also suggest making potentially better choices (see the infographic below and the 2nd to last paragraph of this blog post). What about HCAs, PAHs and other compounds? Here’s how you can decrease your intake of these compounds: 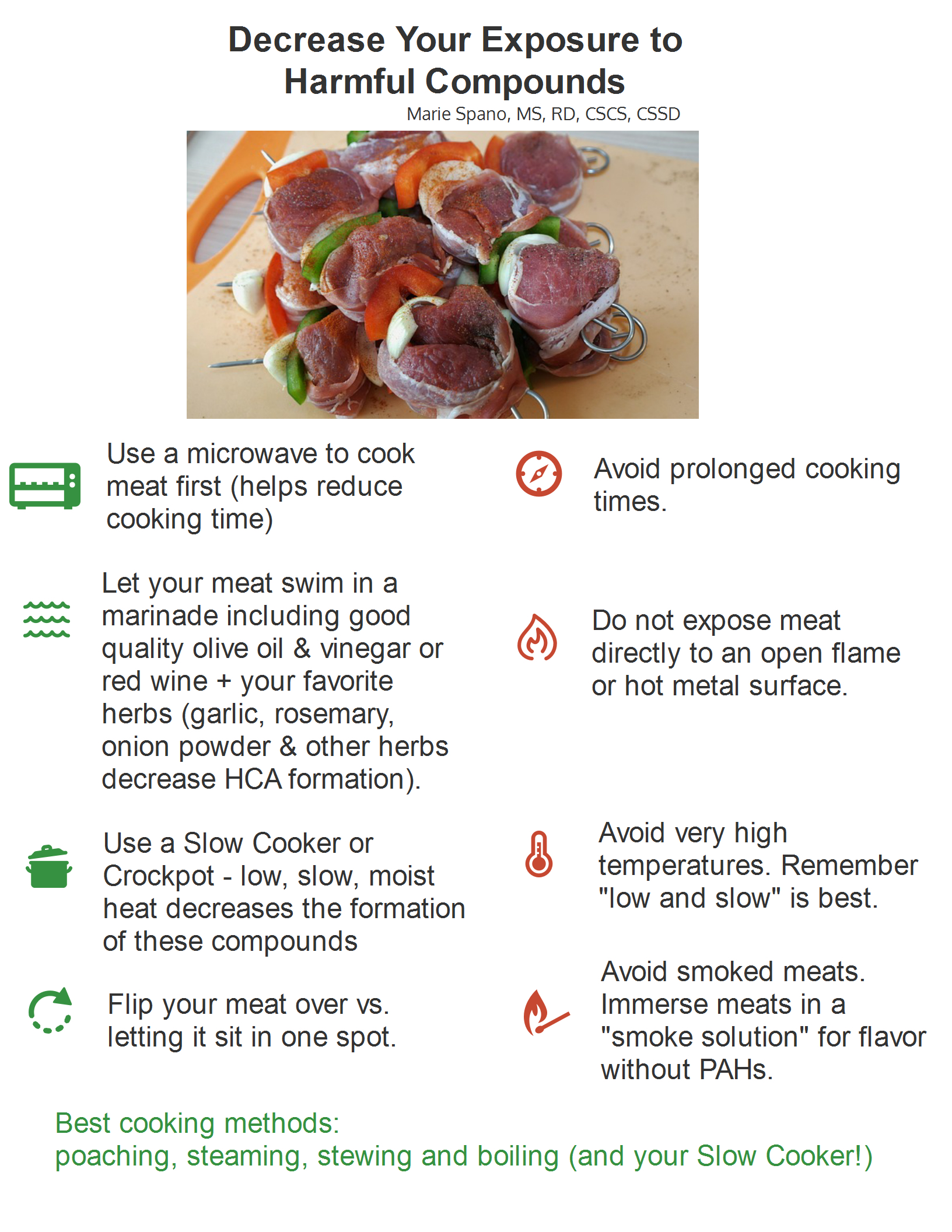 If you aren’t preparing your food at home, take a close look at how it was prepared and cooked so you can minimize your intake of these compounds. If you don’t plan on cutting out processed meats, at the very least, limit your intake of sausage, ham, bacon, hot dogs, pepperoni, pastrami, bologna, corned beef, deli/luncheon meats, salami, nitrite-treated meat or meat products as well as meat preserved by smoking, curing or salting, all of which could increase your risk of cancer.

2 thoughts on “Does Meat Cause Cancer?”