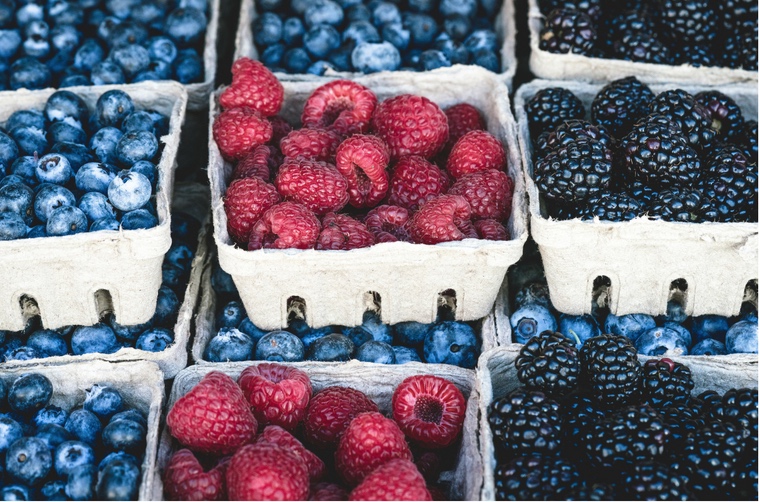 This post does not cover worker safety or in-depth environmental issues.

In some instances there is a man-made form of a compound identical to the one found in nature. For instance, methyl bromide, a fumigant gas used to kill fungi, nematodes and weeds, is found in nature and also made in a lab. Both conventional and organic farmers can use methyl bromide on strawberry plants. Bacillus thuringienis, the most commonly used organic pesticide, is both naturally occurring and man-made; incorporated into some genetically engineered foods. One is natural, one is man-made yet there is no detectable difference between the two (3).

#2 Myth: Organic Foods are Safer for Human Consumption and Better for the Environment

Compounds found in nature are not automatically safe and non-toxic, or safer than man-made compounds (4, 5). Both naturally occurring compounds and man-made chemicals are completely harmless, extremely toxic at a certain dose, or fall somewhere in between these two extremes. You’ve probably heard the saying “the dose makes the poison.” Many compounds we consume every day, from vitamin A to water, can be lethal if consumed in extremely high doses. The same is true for pesticides. Dose and length of exposure determine toxicity. Our government has several safeguards in place for the use of pesticides. First, the EPA evaluates all pesticides. Prior to use in the United States pesticides must be free from unreasonable risk to human health or the environment. Regardless of the type of pesticide used, whether organic or man-made, the Environmental Protection Agency limits the amount of pesticide residues allowed in food and water. The USDA Pesticide Data Program routinely monitors pesticide residues in foods and has found pesticide residues, whether organic or conventional, “pose no safety concern” (8, 9).

Organic pesticides are also not necessarily better for the environment, though they are considered safe in the amounts used (just like man-made pesticides). As an example, rotenone, a naturally occurring compound used in fisheries and can be fatal if inhaled (staff spraying this pesticide must be protected from risk of inhalation) and kills fish within an hour of spraying. Waters treated with rotenone are closed for public swimming for several months after treatment allowing dead fish time to decompose. When used according to instructions, rotenone poses “no overall risk to human health” or the environment (6). In addition, a study in soybeans found organic pesticides did not control aphids (plant lice) as effectively as man-made pesticides and they were more detrimental to the environment (partly due to the amount that needed to be used) (7).

Can’t we farm without any pesticides?

Sure. Some conventional and organic farms do not use pesticides. A conventional farm may choose not to get organic certification, even if they don’t use any pesticides, because of the cost of certification. Keep in mind pesticides help get rid of pests and, can therefore help make food safer by the decreasing the likelihood of pathogens such as E. coli through use of anti-microbial compounds (10, 11).

What about the “Dirty Dozen”, Should I Steer Clear of the Foods that have the Most Pesticide Residues?

Though some studies, as well as pesticide monitoring programs have found conventional produce contains significantly more total pesticide residues then organic produce, significantly more than a miniscule amount is still a miniscule amount. Here’s an analogy: if I give you one penny and give your friend 2 pennies, your friend has 100% more money than you do – that’s a statistically significant difference. However, the financial impact of two pennies vs. one penny is meaningless.

If you want to add up your total exposure, check out the Alliance for Food and Farming developed a pesticide calculator and research behind the calculator:

Several studies have examined nutrient differences between organic and conventionally produced foods. Most of this research shows no appreciable difference in vitamin or mineral content or health effects. What about plant compounds including antioxidants? In some cases organic farming may improve antioxidant content while in others man-made pesticides actually increase concentrations of certain beneficial plant-based compounds (13, 14).

In a world where we have many food choices and an overabundance of incorrect nutrition information, it’s easy to grasp onto a concept that isn’t evidence-based. Don’t get caught up in the hype and instead look for the scientific details. When it comes to organic and conventional foods, you’re not stuck choosing sides but instead can enjoy both – there is no appreciable difference in pesticide residues or nutrition content between the two.

Disclosure: I am an advisor for USFRA. All opinions expressed are my own after taking my typical nosedive into the scientific literature and government regulations on this subject.

6 Lake and stream rehabilitation: rotenone use and health risks. Washington department of fish and wildlife. http://wdfw.wa.gov/licensing/sepa/2016/16041_2002_fseis.pdf

14 Rosen J. A Review of the Nutrition Claims Made by Proponents of Organic Food, Comprehensive Reviews in Food Science and Food Safety 2010;9(3): 270-277.