Your abs are made in the gym and revealed in the kitchen. A good training program develops the muscles in your midsection and the right diet helps banish bloating so you can see your abs. Here are the 10 flat belly foods you should add to your diet for a better looking (and better feeling) mid-section): 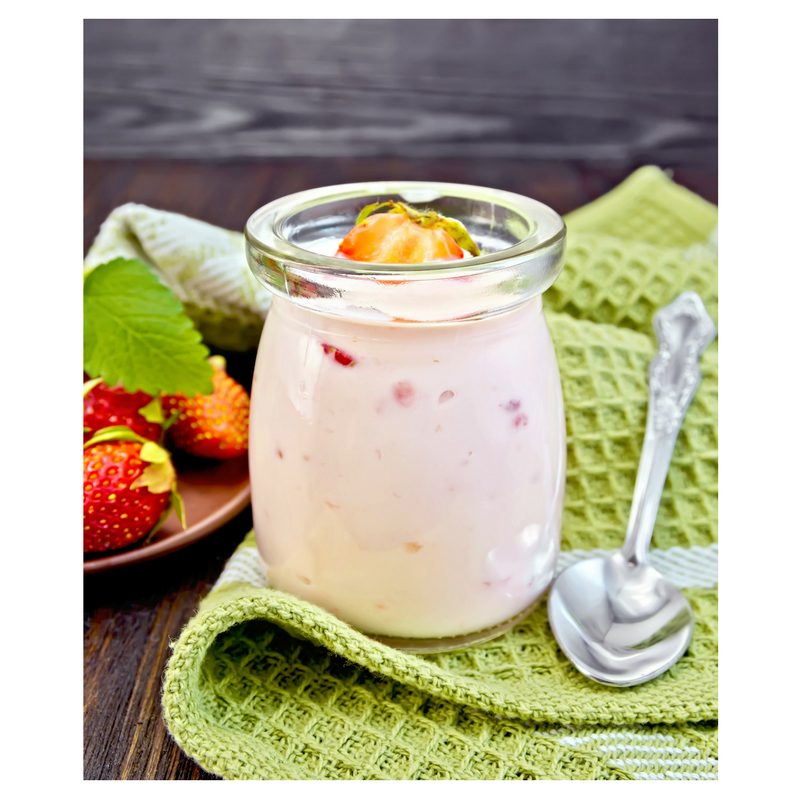 Look for Greek yogurt with “live cultures (aka good bacteria)” or the “Live & Active Cultures” seal. The cultures are good bacteria that take up valuable real estate in your gut, helping your body digest food and decreasing gas and bloating. The amount of healthy, versus harmful, bacteria influences body weight and how much weight you can lose while following a lower calorie diet. Plus, a study published in the International Journal of Obesity found people who get their calcium from yogurt, as opposed to other foods, may lose more weight in their belly. Even more evidence to support yogurt consumption comes from a study showing dieters who ate five servings of dairy, such as Greek yogurt, daily lost more weight and abdominal fat than those who ate just three servings every day. A more recent review of the research found higher dairy intake was associated with lower risk of obesity in the midsection and yogurt seems to help keep weight in check.

Though nuts are relatively high in calories for a small amount of food,  people don’t gain weight when they add nuts to their previously nut-free diet. A study in over 13,000 adults revealed nut eaters, those who ate at least ¼ ounce of nuts or peanuts (technically a legume) per day had smaller waists than adults who didn’t eat nuts. Additionally, tree nuts and peanuts contain a considerable amount of monounsaturated fat. Dieters who eat more foods containing monounsaturated fats may lose more belly fat than those who eat the same number of calories per day with less monounsaturated fat.

When examining dietary patterns, weight and waist circumference in close to eighty thousand people over a 10-year period, researchers found those who ate more vegetables every day had both a lower BMI and smaller waistline compared to adults who ate few vegetables. Asparagus contains prebiotic fiber, a type of fiber that is food for the good bacteria in your gut. Plus, asparagus is a natural mild diuretic making it the perfect food before hitting the beach or wearing a more formfitting outfit.

Popcorn is a whole grain and when you pop it yourself on the stovetop (or in a brown paper bag in the microwave, just add good old fashioned popcorn kernels in a brown paper bag and fold the top) and top it with a little spray butter or spices for flavor, you’ll end up with a snack that takes a long time to eat and fills you up on relatively few calories. In addition, several studies show people who eat about three servings of whole grains per day weight less and have a smaller waistline compared to those who don’t.

Peas are naturally rich in resistant starch, a type of fiber that isn’t completely broken down or absorbed during digestion. Cooking and cooling peas to make a pea salad will significantly increase the amount of resistant starch they content. Rodent studies show resistant starch helps reduce stomach fat and increase hormones that tell the brain it’s time to stop eating.

Choose eggs over cereal in the morning and you’ll tame hunger pangs for hours after breakfast, decreasing the likelihood of overeating later in the day. Make a meal containing at least 25 – 30 total grams of protein (the protein is in the white of the egg so this equates to 4 – 5 egg whites though you can choose any combination of whole eggs and egg whites as long as you consume at least 4 -5 of the whites) so you can cash in on the satiety-enhancing benefits of eggs. Added bonus: following a high protein diet for a short period of time can lead to significant reductions in belly fat.

The combination of caffeine and antioxidants in green tea may lead to small to moderate reductions in body fat and waist size. However, you need to consume quite a bit of it so get creative and cook with green tea by brewing it and using it to cook rice (it’s particularly good with jasmine rice), make stews, soups or stocks. You can also poach fruit green tea or use dried green tea leaves as part of a rub for meats, tofu or fish.

Barley is a cereal grain with a nutty taste and consistency that is a cross between pasta and rice. In a double-blinded trial (both the men and the researchers didn’t know which food they were getting), Japanese men were given rice or a mixture of rice with pearl barley. The group receiving the pearl barley and rice mixture lost a significant amount of visceral fat, the kind that covers your organs like a thick winter blanket and increases risk of heart disease, stroke and type-2 diabetes. Compared to the rice only group, the group who ate pearl barley decreased their waist size.

Blueberries are an excellent source of dietary fiber, which will not only help keep you full but also help keep your waistline in check. Plus they are a natural source of prebiotic fiber – the kind that the good bacteria in your gut munch on.

A flat belly is one of the most recognized signs of a fit body. Blast away abdominal fat with high-intensity cardio and build the underlying muscle by regularly switching up your training program. Also, incorporate a 30-minute abs classes to your routine. At least one study found you can spot reduce if you exercise the same muscle group for at least 30 minutes at a time. Keep in mind abs are made in the gym but revealed in the kitchen. Add the top 10 flat belly foods to your diet while cutting down on sugar alcohols (sorbitol, maltitol, and mannitol are the worst for causing gas and bloating), fizzy drinks and chewing gum (all of these can increase bloating at least temporarily) and you may fall in love with skinny jeans.